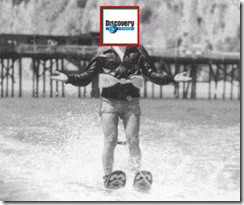 MythBusters – this show was good for the first 10 or so episodes, I would say after that this show itself Jumped the Shark

How It’s Made – a show they pulled from the Science Channel – cool show, but annoying after a while

Cash Cab – half assed attempt at a reality type show. Really, do we need to watch people in a cab answer trivia questions?

Can we get a channel that has unique programming 24 hours a day, but still intelligent and interesting? Not sure if we can these days…

Note: if you don’t know what “Jumped the Shark” is, it refers to a point in something’s life where it has outlasted its usefulness. It comes from the show “Happy Days” where the Fonz jumped sharks on water ski’s in his leather jacket. At that point, it was like “WTF are they still doing making shows here, the best they can come up with is this?”

This site uses Akismet to reduce spam. Learn how your comment data is processed.