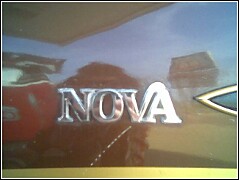 I don’t use or like ITunes, but I do have to say they have cool music in their commericals. Like a year ago it was Jet, now the latest is Steriogram. Check it out. You can be the envy of all your friends.

Who ya gonna call?

If you have ever felt like you are being visited by ghosts in your house, or wherever, no need to worry, you can always call the Central Minnesota Ghostbusters. Don’t ask me, check it out for yourself. Good thing to know we are protected!

KVSC 88.1 is the radio station for Saint Cloud State University. You can listen online to their streaming broadcast. It is nice if you just want to listen to some different music or are sick of your mp3’s or cd’s.

Today as I was just hanging out, VH1 had a “Surreal Life” marathon on, I am guessing the first season or something. Anyways, what a stupid concept. Lets go find six celebrities that haven’t worked in about 5 years (at least), and make them live together for two weeks, giving them missions to do. The celebs in this season were Vanilla Ice, Ron Jeremy, Traci Bingham, Tammy Faye, Erik Estrada, and Trishelle.

Vanilla Ice was a spaz the whole time, about how he wanted to bury his past. Ron Jeremy was just a hound, trying to cop feels and hook up with every chick. Traci Bingham was the ditzy chick of the group, and also the vegetarian who wore leather hats and furs and things. Tammy Faye was nice to everyone, except she only did like 3 missions since everything was morally impure for her. Erik Estrada was the most down to earth of the bunch. Trishelle was the leftover from some other reality show, a 23 year old drunken college chick, not really a celeb, but they just threw her in there for a mix.

There were some amusing things that went on. Gary Coleman did a guest spot, went mental and left. Vanilla Ice sang Ice, Ice Baby on karoke. Other than that, it was just a bunch of ex-celebs crying on how they lost their edge, etc, etc.

By the way, isn’t VH1 a music channel? WTF happened to the videos. I suppose they thought they had to compete with Music Television (MTV), so they have the least amount of music as possible. Oh well, worthless time wasters are needed every now and then…

More like Super Drunky Ball. Or Super Monkey Drunk. This weekend, me and some buds decided to play super monkey ball on gamecube. With a twist.
Any time you die, you take a shot of Blue 100. Geeez we were wasted in like 30 minutes. Helluva lot of fun though!!

Yahoo news is reporting that Rowan Williams, the Archbishop of Canterbury might be performing on “The Simpsons”. The Simpsons have always had big name stars on their show, including Tony Blair and Mick Jaggar. Williams gave an interview where he praised the Simpsons for being on the mark for how society is. The Simpsons are probably the most religious family on TV, so Williams starring in a show wouldn’t be that out of line. Even though Homer might drink beer and get on his kids’ for being screw ups, he still drags himself to church, even when he’d rather be watching football.

Pretty much every normal American is a fan of the Simpsons, because the Simpsons act like Americans do. One non-fan, President George W. Bush said: “We need a nation closer to ‘The Waltons’ than ‘The Simpsons.”‘ Maybe that is why our country is so screwed up right now. Even though the Homer Simpson is religious, he doesn’t wear it on his sleeve and use it to push his agenda, like Bush does. I’m sure Ma and Pa Walton would love what Bush is doing, I’m sure they were devout Christians. But you see, Lisa Simpson is a Buddhist, and Homer doesn’t mind, he is open to all religions, and if President Bush saw that, maybe he too would understand how the world works, instead of going to war for no reason.

Anyways, the Simpsons are always doing new and crazy things, and this is something new and cool. I can’t wait to see the episode.