We are kicking off the MADPASS SQL Server Users group tonight in Madison. I am in the initial “Director of Membership”, keeping track of minutes and members, etc. If you are available tonight, come check it out. Overview of BI from Dave DuVarney. Pizza and Beer provided, should be good info and networking event as well.

Many of today’s organizations rely on SQL Server and SharePoint to run their businesses.  Included with these products is a tremendous ability to also derive valuable insight from an organizations data.  In this session, Dave will walk through where the Microsoft BI solutions have come from, where they are today and where Microsoft is headed in the future.  After leaving this session, you should have a better understanding of what Microsoft offers and how best to apply it in your environment.

Speaker:
Dave DuVarney is an independent BI consultant and trainer. He has broad technical knowledge and  has been involved in multiple software development projects ranging from contract management systems to human rights auditing.  He is proficient in numerous development languages as well as Microsoft Business Intelligence technologies.  Most recently he has been consulting and developing with SQL Server 2008 Analysis Services, Reporting Services and Integration Services. Dave is the co-author of Professional SQL Server Reporting Services 2000, Professional SQL Server Reporting Services 2005 and SQL Server 2008 Analysis Services Step by Step.

Park behind the building and walk in main entrance.
Our room will be straight ahead on the first floor.

Please register for the event on EventBrite here: http://madpass.eventbrite.com/?ref=ebtn

Now that I live in Wisconsin, I guess I have to write about this. Going to school at Saint Cloud State, which is a fairly good party school, you do end up going to happy hour now and then. At the bars there, they always have pretty good deals. “1 dollar for Domestic Taps” etc, etc.

So you walk in, and see that, and ask for a “Leinie’s HoneyWeiss” which is usually on tap in most bars in MN, but then you get a crazy response..

“We consider Leinie’s to be an Import”

WTF? An import? All the way from WI huh, so you can charge 4 dollars a glass? Man..

Anyways, I subscribe to Slashfood in my RSS Feeds, it’s one of my “fun” subscriptions, like xkcd, or gullible info, etc. I read today about “Leinie’s takes small town Wisconsin nationwide” What I have to wonder though, is it going to be served up as a domestic or import? We will just have to see.

As a side note. I wish Madison WI’s cool blog site Dane101 would let you submit stories. This is a trackback to them to see if they see this and take note. 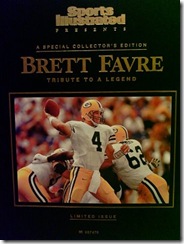 He must have a deal with SI that he gets a percentage of the tribute book profits, so they can keep coming out with them every few years. 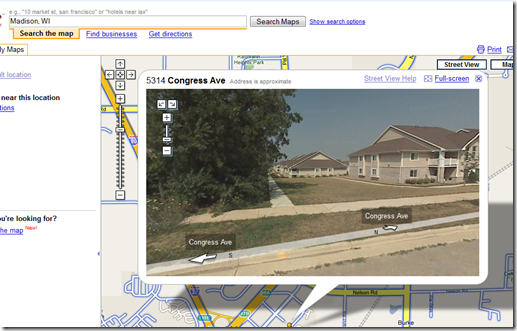 Although, not as exciting as my street view in Portland, I live way back in the apartments in the back. No street passes by it. Although this is pretty cool. Good way to find your way around, or at least not get lost. But remember, Google Maps gets you lost!

Everything is subject to change at this point 🙂

On an unrelated note, Obama is in Madison tonight, at the Kohl Center. I got called 3 times to go and twice to go by people here. I am not going, I will watch it streaming online and watch MSNBC for the Chesapeake Tuesday results 🙂

Ok, another big difference from Portland. The coffee shops in Madison are few and far between, and there aren’t many Starbucks around, and if there are, they are drive thru, or at Target. And the east side of Madison is really low on coffee shops..

I have been to a couple of shops on the east side:

Cool Beans – This is located within the East Towne mall area roads. It is a bigger place, as big as a normal Starbucks. It has a fireplace which is cool, and it seems normal enough. My EVDO card worked so I didn’t try the Wifi, but the downside to Cool Beans is that there is like 1 (maybe 2) outlets available, and there are a lot of just “cushy” seats, like not useful for using a laptop. Coffee shops should have outlets at every table! The good thing is that it is pretty closet to my apt, but I think Beans ‘n Cream’s east Madison location is actually closer.

Beans ‘n Cream – I have been the the Sun Prairie location. It was nice, a little far to drive from my apt every day. It was hot with a fire going. The kicker though, my Verizon EVDO card got a weak or no signal, and it was on National Access (read: slow) so it was worthless. I tried out their wifi, but it isn’t open. You have to go to the counter to get a 60 minute pass, they print you off a user/password. Kind of odd, I didn’t like it. I will try the east Madison location, hopefully my EVDO card will pick up Broadband Access (read: fast) – I walked by the east Madison location, and there seemed to be less seating. One thing is that there were some outlets (always a good thing) at both..

Starbucks – ? Non-existent in Madison. There are a few, but the parking sucks, or they are drive-thru. They are mostly on the west side, and I am not driving 30-45 minutes to go there. The closest one to me is at the East Towne Target, and there are NO outlets – WTF? I mean I would go to Target and just try it and see how it went, but no outlets? It is hard enough to find one at a regular shop that isn’t being used. I guess they don’t want people with laptops to show up and stay for a while (I actually think the Starbucks at Target is ran as a different type of franchise than a regular Starbucks).

Overall? Well, I don’t even drink coffee (I do but not often) – so it really isn’t about the coffee, it is about the atmosphere for me, and the standardization (outlets, fireplace, places to sit, etc) – usually I am just getting hot chocolate… I do miss the bagels at Wired on Burnside though, and the coffee 🙂

Stumbled across this site – http://www.cityofmadison.com/reportaproblem/Potholes.cfm

You can report potholes in Madison. First off, can I just report an entire road? All of 151/East Washington/University from the Interstate to Middleton. And then how about every road surrounding the East Towne Mall. Add into that just about every side street in town.

I swear the roads in Madison are the worst I have ever seen. It would be better driving on dirt roads, at least townships have to grate them every once in a while, so they are driveable. I hope my car survives Madison roads – and I don’t even drive that much!

One big difference between Madison and Portland is that it is tough to find stuff in Madison, unlike Portland. Portland is a big enough city where it has its own Citysearch and Craigslist is used a lot more. Madison just fits into the “National” citysearch, and craigslist is pretty empty.

Portland as the Mercury and Willamette Weekly, and other local papers, and really the only one I have seen here in Madison is the Isthmus, and there is a Madison magazine as well, but there are slim pickin’s, even in online zines or blogs in Madison. Smaller city = smaller footprint I guess…

Unknown to me, Otis Redding actually died in Lake Monona here in Madison 40 years ago (on Dec 10th).. There are tributes going on all over the place here in Madison this week. One thing about Otis was that “Sittin’ on the Dock of the Bay” was a posthumous release, and it became and #1 hit!

So, in Portland, the parking meters are like high tech. You can put your debit/credit card in, pick some time, it prints a sticker, you put it on your window, all the meters are clearly labeled like 90 minutes, 2 hours, etc. I heard in the near future you will be able to add more money via your cell using TXT message to keep the meter running, just .. wonderful.

Now, Madison. “Capital City” (reminds me of the Simpsons) – you think it would be on the cutting edge? No. Like St. Cloud, its manual feed coin meters. Like everyone carries around coins? Reminds me of the toll roads on the drive to Madison. Pay $1.20 – exact change…WTF? The meters only take 25 cent max, have they ever heard of Sacagawea coins? 🙂

Well, that was the first difference, there are a few more I have up my sleeve, and I am sure there will be more as I go explore the city. One thing I will say though, it is weird now because I hear the Minnesota accent in people when the talk, yaaaaa?