Microsoft has published a site, PC vs Mac

There is only one thing you have to know, everything else is fluff.

You will never get a blue screen of death on a Mac. Oh, I got one last night on a Windows machine. With an xlsx half way open and not done yet. Lovely.

And I love Windows, for Development and Business Intelligence. It is the hardware and software that have problems working together. Should Microsoft try to build a PC? Hardware? (ala Xbox?) Would it perform better? Maybe. Would they have more control? Of course, the hardware and software could integrate nicely. I would buy a mythical Microsoft computer before buying a regular PC. Just like I would buy a Mac rather than a Hackintosh 🙂

Have you ever wanted to quickly mockup software, website, iPhone app, etc? Most people do it on paper, or try something in Visio, or Word, or even Excel!!! But they just lack that feeling of what they want you to build. I was looking around on the web and stumbled upon Balsamiq Mockups

I download the Adobe Air app pretty quickly and got started, I wanted to see how quickly I could mock up a website I am working on, because there are some new pages and I want just a template, and then be able to quickly mock up what a new page would look like and let the other team members see it without having to code anything. Check this out (this is an example of my site, not the final version): 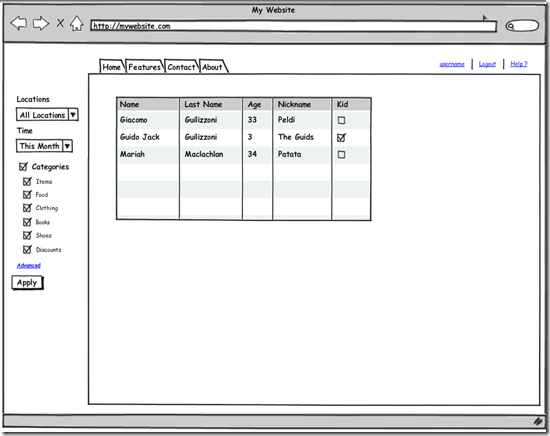 I did this in less than 5 minutes. I spent more time and refined it to what I wanted, and now I have a template which I can use for new pages, and also a mockup of a report page.

Check out http://mockupstogo.net/?c=1 to get more items, and see examples. You can mock up pretty much any existing site on the web or app, this software is awesome! I wish I would have had this for the last 8 years doing software development.

There was one thing I couldn’t figure out, which was a bar graph but having the bars as columns, but I am guessing I just don’t know how to rotate it, or I need to download some more mock objects.

If you are looking for some software to easily mock up new projects to clients, or to other users on your team, or whoever, check out this tool, you will find that it is easy to use and allows you to quickly mock up and communicate what you are looking for in an end result to your devs as well as other team members (there are some awesome collaboration tools they have baked in – even if someone doesn’t have balsamiq installed, they can import an XML file into a web version to view what it looks like, tweak it, and email it back to you)

Try it out, and happy mocking! 🙂

I decided to try out a new IM client tonight, Digsby

I have been using pidgin for a long time and really like it. Looks like digsby is just like pidgin with some more features, so that is cool. I used code "lifehacker" to download/install

Check it out if you are sick of your current (read: trillan) IM client

Check it out here

I have been a huge fan of Newsgator since it came out. For the last few weeks I have been using Google Reader, which is OK, but not as good as FeedDemon by far, there was an article posted about that here recently..and in the comments all the trolls yell “but goog reader is free!!” – well , now is Feed Demon (and the rest of the products) – awesome.

Now just sync with Google Reader (really this is a request for the Google Reader team to allow auto import or sync with Newsgator) and I will be happy. I have a feeling I will be switching back to Newsgator soon though..they have iPhone interface, they have FeedDemon, NewsNetWire and Online versions…so it fits all my devices!

First I started with SharpReader for a while, a fat client, that was OK..but a lot of feeds had errors..

I then started using RSS Bandit, which was good, but slow sometimes for the amount of feeds I had.

I then found Newsgator. Most people use Newsgator for just the online reader, but it is so much more. What it really is, is a online store for your feeds (OPML) that you can use between all their different clients, even the newest builds of RSS Bandit support the Newsgator sync framework.

I used Newsgator Inbox for a while, with Outlook, then I used Newsgator Online for a while, I tried their mobile version and Media Center editions, then I tried Feed Demon, which really rocks. And since my feeds are sync’d between all these platforms, when I read one here, it is marked read there, etc. Even on my mac I tried News Net Wire… and now they have an iPhone interface as well.

Since I took the plunge to GAFYD, and I am using Gmail, etc, I decided to try Google Reader….A few WTF’s….

One of the worst things is, I can’t sync my Newsgator feed with Google Reader. This is because Goog Reader has no or a crappy API, and Newsgator doesnt want to do anything to sync with them or whatever, just sucks though..

The other thing I have found, is that feeds don’t update fast enough. I read in the help if a feed doesnt have a lot of subs, then it wont update very often, and other feeds will update about once an hour. I feel sometimes like I am missing some stuff, especially on the weekend where I try to keep my feeds read up to date..

The sharing and starring is good, I will see how that works as I go, as they just added sharing via Google Talk as well..

One thing though to add to all of this is, I can’t use my GAFYD account with google reader, I had to sign up for ANOTHER Google account using my same email/password to kind of mimic it using the same account, just wacked…another weird thing with GAFYD…

Anyways, at this point I don’t see a lot of things that make the bloggers oooh and ahh over Google Reader compared to Newsgator… The trends are nice, but it isnt mind blowing… we will see…

A friend was complaining going on about how Windows looks bad and Macs just look so cool, yadda yadda, and as I dug in deeper, it was like, “oooh the pretty icons at the bottom” and stuff like that.

So, I decided to look into options for Windows with a dock at the bottom. I know Stardock has Object Desktop has something, but I have tried their suite in the past, just puts too much bloat on your system, and it costs $$ too. I found one and set up their system to by more “Mac Like”

Found another alternative – RocketDock. (gotta love the tagline: “The single greatest piece of software. Ever.”) – It is a sweet dock application, I like it so far. And, I have been using Windows since Win 3.1, and then 9x, and I have always had my taskbar at the bottom of the screen, the default. Well, after install RocketDock, I am trying something new – the taskbar at the top.

I have the RocketDock set to autohide, which is cool.It is a different experience, but I kind of like it. I still am switching the Sidebar in Vista on and off too, I have the App Launcher gadget which is nice, as well as the Battery Meter gadget…

If you are feeling like you need a change, check out RocketDock

So, today I decided to try out Microsoft’s site: CodePlex. I recently created a utility app to process dimensions and partitions in SSAS (SQL Server Analysis Services) because I didn’t like the way it worked in SSMS (SQL Server Management Studio). I don’t know because I never used it, but I guess in pre-SP2 you could process multiple objects at the same time, just hit process, move on to the next one. In SP2, the process dialog is modal so you can get around it, you have to wait for the object to process – yuck!

Also, I just wanted to try out CodePlex and see how it works, what I like and don’t like. Since becoming a contractor doing Data Warehousing and BI stuff, I miss coding in .NET (and any other language), so I want to keep that up in my free time. This is a result of that. Hopefully once I get used to CodePlex I will contribute to some other Open Source .NET Projects, sounds like fun to me!

Here is the link to the project: http://www.codeplex.com/SSASUtils

Some of the glue code for connecting and processing I gleamed from other examples and projects I have seen around the web, some in VB.net , some that didn’t even work, etc. Hopefully more SSAS Utils can be added to this project and it can become way more useful that it is now (although I do use it pretty much every day right now).

CodePlex: I like it so far. There are few things that could be done better, but I am using the Team Explorer source control which fits nicely into VS2005, really cool. I will probably post up more on CodePlex later. If I get the urge, I might create project for some other stuff I have lingering around my hard drive (FFMC, PocketBlogger, other random utils). I am anxious to see what the community participation is like, I tired GotDotNet back in the day and it was weak, we will see with CodePlex.

Randomly, I had Windows Live Messenger and Yahoo Messenger up at the same time. Funny though, they both had the same EBay ads up.

Wow, so anyway’s, I have been trying out the new RealPlayer (http://www.real.com) and it is pretty sweet. I don’t use it to play anything, but what it does add is a little thing in your browser to download YouTube videos, and other flash videos, directly to your computer. Awesome!

Also installed SongBird – by Mozilla. It is actually based on the Firefox code base. Reason why it is so sweet? It “plays the web”. You goto a site with mp3’s in it, and it shows which ones, you can play them, download them to your local library, etc. It is pretty sweet, great feature. As far as a player? Not sure yet, it is 0.98 version, I want to see version 1.0

I am at the PDX airport right now waiting for my flight, NW 598 – if you are bored today, use Google Earth and track my flight! (I have blogged about this before) Heading back to MN for the week, 21st-29th. Should be a good time. Going to Nickelback on Monday, hanging with friends the rest of the week, heading up the Iron Range at the end of the week. My dad finally got high speed, wow, 2007…

Oh BTW – was at the pub in the airport, sitting next to Cameron Diaz, pretty crazy!

See you in Central Standard Time!